Rublieuskaja’s new novel is set in the decadent years at the end of the nineteenth century, but opens in our times. The young journalist Sierafima is setting off to inspect a flat that she wishes to rent from a young man, the biologist Haljash, with whom she is secretly in love. He is getting ready to leave for the USA, where his fiancee is waiting for him in one of the universities there. The two of them are sorting things out in the flat when Haljash discovers among his grandfather’s papers a daguerreotype and a diary that belonged to an unknown woman… Mysterious events dating back to the 1890s unfold before the reader. The owners of a photographic studio in a small provincial Belarusian town – the beautiful, independent-minded Bahuslava and her father Varaksa Nichiel – specialise in portraits of the newly deceased; they have to set off on an expedition to photograph a unique ethnographical collection on the remote, sinister estate of Zhuchavichy. The current owner of the estate, Prince Shymon Kahaniecki, is believed by the local villagers to be a werewolf. The novel encompasses elements of the Gothic, the horror story, a passionate love affair in spite of everything, and the merciless baseness of humanity. A solution to this romantic and terrifying story is found only in our day.

Born in 1965 in Minsk. She is a writer, poet and literary critic. She is an architect and philologist by education. She is the author of more than ten books of prose and poetry. She works in genres of popular fiction, producing widely varying types of historical novels, eg romance, crime and detection, horror. She has recently been writing a great deal for teenagers. She won the “Golden Apostrophe” Prize in 2004 and the Francishak Bahushevich Prize of the Belarusian-PEN Centre in 2011 for her novel Sutarenni Romula [The souterrains of Romulus]. 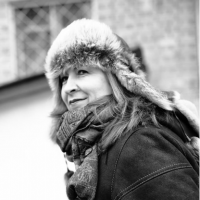